Cricket World Cup 2011: The pained casualties, the inept schoolboys and the snack-hunting police

Doug Bollinger’s left ankle has plunged the World Cup holders into an injury crisis. He flew home yesterday but may return later in the tournament. The Australians came to India already missing Michael “Mr Cricket” Hussey, Nathan Hauritz, Ryan Harris, Clint McKay, Xavier Doherty and Shaun Marsh but Bollinger is the first member of the squad to be flown home mid-tournament. “He’s got a thing called posterior impingement,” said Alex Kountouris, the team physiotherapist. “Basically, when he lands to bowl, one bone hits another bone and the bone becomes really inflamed and irritated. It’s fairly common in fast bowlers. Brett Lee has had five or six lots of surgery on that in the past.” If Bollinger doesn’t return, the possibility of a fit-again Hussey as a replacement is seen as a real possibility.

Virender Sehwag, the hosts’ dangerous opening bat, was hit in the ribs while batting in the nets yesterday, but will be fit to play against England in India’s second World Cup game tomorrow. “Virender was hit on the left ribcage in the nets earlier today. He is currently under medication. However, he is expected to be fit for the match against England on Sunday,” BCCI secretary N. Srinivasan said in a statement. Sehwag opened the tournament with a phenomenal 175 against fellow-hosts Bangladesh.

Graeme Swann after England’s inept display against Holland in their opening game: “Let’s face it, we fielded like a bunch of schoolboys.” Swann himself put down a straightforward catch during the unconvincing six-wicket win over the Dutch minnows at Nagpur on Tuesday. And he heads into the sell-out clash against hosts India at Bangalore tomorrow admitting: “We will need to raise our standards, it’s going to be a huge game. But there’s nothing better than silencing an Indian crowd.”

Swann, who bowled a tight spell of 2-35 at Nagpur, produced his most memorable delivery just days before the World Cup began – with the birth of his son Wilfred. The 31-year-old admitted: “It was gut-wrenching to leave him. Within two days of the little fella coming in to the world, I’m saying a teary goodbye. In 18 years he will give me grief for not being there but I’ll be able to say: ‘I had to go to India and beat Holland!’”

Andy Saltzman on the security forces at the Feroz Shah Kotla stadium in Delhi, where South Africa crushed New Zealand on Thursday night: “Their indefatigable determination to ensure that no rogue snacks entered the ground was reminiscent of Albert Einstein’s quest to unlock the secrets of the universe.” Saltzman’s cricketing satire is gaining an increasing audience on Cricinfo, but this is clearly no laughing matter. He concludes: “I understand Delhi has had its problems in the past with excessively jaunty crowds but whoever was responsible for this cocktail of incompetence, intrusive overzealousness and administrative dinosaurism seemed intent on stripping the joy from a sporting event.”

Using the remote lack of control

Saltzman on Ricky Ponting’s infamous assault on a television set after his dismissal in Australia’s opening win over Zimbabwe in Ahmedabad on Monday: “It seems clear to this columnist that Ponting was launching an heroic one-man protest against the intrusive ubiquity of 21st century TV. We may disagree with his methods, but we can applaud his sentiment.”

Shock news: talented musical trio in the bar at Delhi's Intercontinental in Nehru Place have NOT offered me a recording contract or been approached by ANY R&D guys since my startling rendition of Frank Sinatra's My Way on Wednesday night. Video coming soon. 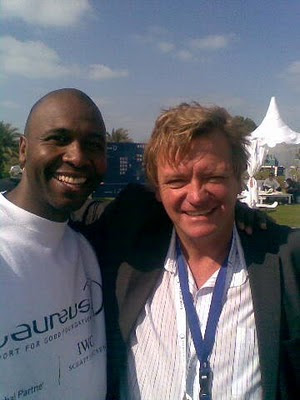 Ah, the Laureus Sports Awards. Big event for us in Abu Dhabi. Or so I am assured. Looked that way this morning.

There we were, out on the lawns of the magnificent Emirates Palace Hotel, surrounded by autumnal stars and mid-winter sunshine.
Two seven-side-teams, packed with big names from the past decade. Surprisingly, among them, there was the beanpole figure of Patrick Vieira. Surely he should be back with Manchester City helping them usurp their no-longer-unbeaten rivals United in the fascinating Premier League chase?

But no, with vintage performers from all over the world in action, and about 500 people, mostly journalists, watching as they ate a wonderful free breakfast, Paddy and pals were having a kick-about.

Apparently it ended 11-11 and went to a golden goal. Stevie McManaman, still with the same Wednesday legs (at Liverpool, they'd says Wednesday gonna break, his legs are so skinny), may have scored it. Or was it Christian Karembeu, the one with the pert wife?

It matters not. Marcelle Desailly was out there, Victor Baia in goal... even a popular singer by the name of Ronan Keating, who looked the most energetic of the lot! Oh, and there was the world's tennis No1 Caroline Wozniacki cheering enthusiastically. Die-hard Liverpool fan apparently. Thank God for Kenny Dalglish. I didn't tell her the old Roy Hodgson Under 13 story.

In all, the glitzy kickabout apparently earned half a million Euros for charity. Not sure how. But there it is. That's what these Laureus Awards do, have done since 2000.

Earn money for charity, help grass roots football. Something about Laureus Sport for Good Foundation. God knows how it works, but it seems to. All the cynical sports people involved swear by it. Frequently, as sportspeople do.

They were queuing up afterwards, the stars, to say nice things about Abu Dhabi and Laureus. About the things they've done for this strange sporting foundation which first erupted on to the scene in 2000, handing out awards to Tiger Woods and the like.

Tonight they'll do it again. Sebastian Vettel, the Formula One champion, is nominated for Sportsman of the Year, along with racketeer Rafa Nadal and hot favourite Manny Pacquiao, not to be argued with. Caroline Wozniacki is expected to see off British heptathlete Jessica Ennis is the women's category, and I'm backing New Zealand's All Black for the team trophy, though the European Ryder Cup team will run them close.

Look, as Lucas Radbe - the former Leeds and South Africa star pictured with me above - said: "It's a lot of fun coming out here, but they do good too, Laureus."

Fair enough. Why knock it? Tabloid journalists tend to want to knock these things over. The big spending, the lavish entertainment. But hold on. Abu Dhabi is a fairy tale country. Particularly when you're on the lush green lawns of the Emirates Palace hotel, with the fabulous beach, strewn with camels, shimmering in the background. Let's not return to reality. Let's live happily ever after.

So it's back to this unbelievable seven-star hotel to scribble something down. Then the awards tonight. Red carpet out (and it's a bloody big one, must be one of those local carpets they've flown in, Persian style). Ronan will sing, Morgan Freeman will make us cry, Kevin Spacey will hand out the statuettes and make us laugh. Hopefully.

Spacey's so caught up in it, he's apparently launching a dramatic academy out here. Theatrical types aren't that welcome, but if anyone can persuade devout Moslems to come out of the acting closet, Kev can.
I've just been trying to persuade Lucas Radebe - the man who inspired the Leeds-based Kaizer Chiefs rock band - to come out here and coach the locals. Neil Tovey, his old Bafana Bafana team-mate and former Amazulu and Black Stars coach, has already sent me his CV. This is the place to be. Tax free, a vibrant economy, the government pushing sport so hard. Nowhere else like it.

Forget the barren out beyond this fabulous city. The troubled Arab neighbours like Egypt, Tunisia, Yemen and Lebanon.

Here, they have machines giving out gold in the lobby. Petrol costs less than water. Smoking is so cheap you feel compelled to puff.

And tonight, when the eyes of the world watch sportsmen glitter, we can forget, for a moment, the troubles of the real world.

For a moment. It's mid-winter here. The sun's shining. While the rest of the world endures floods and recession, here we bask and spend. Tax free of course. Have I mentioned that? Paradise. Slightly plastic, very shiny, all brand new, nothing here 30 years ago. But paradise in the style of Milton.
Posted by Unknown at 11:06 No comments: