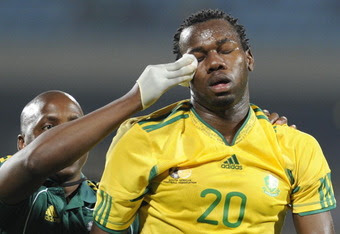 BONGANI KHUMALO is due to make his English League debut for rock-bottom Championship club Preston North End against Swansea at Deepdale on Saturday after finally accepting a Beckhamesque loan deal on his road to stardom.

Khumalo, who moved from South African champions SuperSports United to Tottenham Hotspur for £1.5m in the January transfer window, has yet to make an appearance for Harry Redknapp’s side. Like David Beckham in his early days at Manchester United in 1994, Khumalo has gone to Preston, England’s first ever League champions, to earn his Spurs.

Beckham, then 19, played five games for Preston in 1995, scoring twice and establishing himself as a future star. Preston boss Phil Brown revealed he sent an email to Redknapp a month ago suggesting the move, which Brown describes as a "massive favour".

Brown added on the club’s website: "I am absolutely delighted. Hopefully Khumalo will be a massive success here.”

Ironically both Preston and Spurs share the nickname Lilywhites, though their fortunes have differed mightily in recent years. After a strong performance in Bafana Bafana’s historic 1-0 win over Egypt on Saturday night, Khumalo’s “loan ranger” deal – which last until the end of the season - was announced before Spurs confirmed rival centre-half William Gallas had signed a two-year contract extension at White Hart Lane.

The Gallas decision – he will now stay at the club until 2013 - means the veteran former Arsenal and Chelsea Frenchman is one of SIX centre-backs ahead of Khumalo in the pecking order as Tottenham continue their Champions League quest. Former England defender Jonathan Woodgate is currently injured (again), but Redknapp can also call upon compatriots Sebastien Bassong, Younes Kaboul, England centre-back Michael Dawson and the experienced Ledley King, who is approaching full fitness after months of struggling with his incurable knee problems.

Khumalo was always expected to go out on loan to a smaller club, but early appearances on the bench for the first team during a defensive injury mini-crisis meant the decision to farm him out to Brown’s Preston was delayed until the loan window closed last Thursday.

Steve Caulker, the 19-year-old Spurs central defender competing with Khumalo for a future at Spurs, has been loaned out twice in recent years, playing 44 games for Yeovil in 2008/09 and 29 for Bristol City this season.

Khumalo performed admirably in South Africa’s last-gasp 1-0 win over African champions Egypt at Ellis Park last Saturday next to his old SuperSports partner Morgan Gould, who was voted Man of the Match.

The move came outside the January transfer window because clubs below the English Premier League are allowed to take players on loan from 8 February until 24 March. Fellow Bafana Bafana international Kagisho Dikgacoi's loan move from Fulham to Crystal Palace also went through during the loan window, though Khumalo’s was completed just before the 5pm deadline last Thursday.

Preston’s Deepdale ground in Lancashire is one of the historic bastions of English football - the club were one of the founder members of the Football League back in 1888. They became the first winners of the League and FA Cup double that season when they were unbeaten and didn’t concede a single goal in either competition. They also won the League the next year, in 1890. Their last major trophy was the FA Cup in 1938. They haven’t been in the top flight of English football since 1961, though they did reach the Championship play-offs in 2009.

Khumalo, the Swaziland-born 24-year-old from Pretoria, is expected to make his debut against third-placed Swansea on Saturday. Preston, a city of around 115,000, was a post-industrial revolution boom town but is a long way from the Jacaranda City or Tottenham, where he enjoyed the company of compatriot Steven Pienaar.

Though they are currently bottom of the Championship, Preston have enjoyed a bit of a revival of late, beating fellow strugglers Scunthorpe 3-0 away and Coventry 2-1 at home in their last game on March 19 in front of 12,269 at Deepdale, their home since 1875 with a capacity of around 22,000. They are now just three points adrift of Scunthorpe at the foot of the Championship. 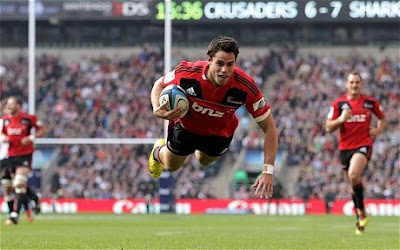 STUART BARNES, the often cynical former England fly-half and Sky rugby analyst could hardly believe what he was seeing.

As the wonder of the Crusaders 44-28 victory over the Sharks unfolded in front of 35,094 ex-pats and bemused Londoners at Twickenham last night, Barnesie enthused: “This may be the first Super rugby clash in the northern hemisphere, but after this, let’s hope it’s not the last.”

Barnes, usually so caustic on rugby matters, is not alone. Crusaders coach Todd Blackadder agrees. He said: "If the powers that be decide they would like to see other Super 15 games here that would be good for our sport."

And how. We saw 80 minutes of scintillating rugby between the Christchurch side denied a home venue by last month’s earthquake and Durban’s never-say-die Sharks. An epic first half dominated by the Kiwis, a wonderful comeback from the South Africans... and a final, victory clinching try for the land of the long white cloud.

And of course, we witnessed the perfect boot of Dan Carter, the greatest kicker in the century-long history of the great All Black tradition. He scored 22 perfect points, including one of the nine tries, in 62 minutes before limping off, his heart no doubt filled with memories of that earthquake, which he felt shudder the walls of the changing room at Rugby Park in Christchurch on 22 February.

Over 160 people died that day. Yesterday’s match was as much as a sporting contest can do to pay tribute to those unfortunates. Sounds trite, but you can’t deny the gut-wrenching feeling was there for all to see at Twickenham yesterday.

Wonderful stuff. And every one of the tickets sold will see £5 go to the Red Cross Earthquake Emergency Fund.

And all that after seeing South Africa’s footballers clinch an historic 1-0 victory over Egypt the night before, ironically at Ellis Park, the home of South African rugby.

Just what global sports fans needed really, after witnessing South Africa choke against New Zealand on Friday and England fail by a mere 10 wickets against Sri Lanka in the final cricket World Cup quarter-final on Saturday.

World champion Sebastian Vettel’s start-to-finish victory in the opening Grand Prix of the season in Melbourne, with Lewis Hamilton second, was hardly epic. England’s 2-0 Euro 2012 victory over Wales on Saturday was predictable, as was Brazil’s triumph over Scotland by the same score on Sunday.

But for me, this was a weekend dominated by two great moments. The manic screech of the commentator as Katlego “Killer” Mphela’s 93rd minute goal hit the back of the net to end the six year reign of the Pharoahs, seven-time African champions.

And the roar of “Beast” in West London every time the Zimbabwean-born Springbok prop Tendai Mtawarira got involved at Twickenham. 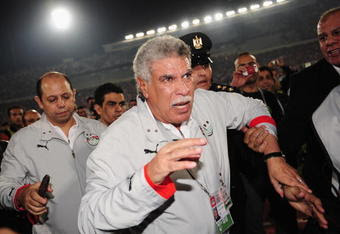 Hassan Shehata, the semi-mythical coach of Egypt, insists his three-time winners of the African Cup of Nations “will come good” when they play South Africa at Ellis Park on Saturday.

Ahead of perhaps the biggest game in Africa this year, Shehata’s team – and their fans - are still reeling from the Spring Revolution which dislodged president Hosni Mubarak last month.

And on the field, the Pharoahs, for so long the undisputed kings of the dark continent, find themselves in uncharted territory too after an unimpressive draw against Sierra Leone in Cairo and an historic defeat in niggling Niger.

But Shehata, 61, who includes Borussia Dortmund forward Mohamed Zida and Sunderland defender Ahmed Elmohamady in his 23-man squad currently training at Balfour Park in Johannesburg, told FIFA: “I’m used to being criticised and blamed. I’ve been through it all before. All it does is increase my determination, because I really am very confident in my players. They’ve always come good when called upon.”

With Bafana Bafana top of Group G and playing in front of a capacity crowd at Ellis Park, Shehata added: “It should be a great match between Africa’s top two teams. We’ve always worn the colours of our nation with honour and shown great strength in our performances, and that’s what we’ll continue to do.

“South Africa are serious, experienced opponents, and they got a big boost from their solid performances at the last World Cup, which they hosted.

“We know what’s expected of us, and we’re going to try our hardest to deliver the win our supporters are hoping for.”

Without a game since January 22 because of the unrest at home, Shehata’s side have slumped to 35rdin the FIFA rankings and there is a real chance they will become the firsts reigning African champions not to qualify if they lose on Saturday to the side now ranked 46th in the world .

But his assistant coach Shawki Gharib, who won the competition as a player in 1986, insists: “Our boys actually needed a bit of a break after six years of continuous competition. We should see this situation as an opportunity.

“Many people think that our lack of matches during this time will have negative consequences. I’m not so sure.

"There’s no doubt it will have had an effect on the players physical condition, but there are solutions to that type of problem, such as planning more intensive training sessions.”

In nine games between the countries so far, both have won four. But Egypt will be boosted by their personal memories of Ellis Park – they beat World Cup holders Italy there at the 2009 Confederations Cup.

With Portsmouth’s 107-cap captain Aaron “Mbazo” Mokoena axed by coach Pitso Mosimane, Tottenham’s Steven Pienaar will take the captain’s armband – both he and Siphiwe Tshabalala share the honour of being the most-capped South Africans on show with 57 appearances each.

Mamelodi Sundowns striker Katlego Mphela, who missed South Africa's two previous Group G matches against the USA and Kenya, said: "It is good to be back in the squad and it means a lot to me as it indicates that the coach has faith in me. So now I need to repay that faith with a goal against Egypt. Our plan is to attack all the way."

Currently tied on 18 goals with Philemon Masinga, he needs one more to become Bafana Bafana’s third-best striker of all time, behind Shaun Bartlett (29) and the out-of-favour West Ham goal-getter Benni McCarthy, 31.

But “attacking all the way” against a side who have won the African Cup of Nations a record seven times may be a little rash. Boating nine of the players who won the last African Cup of Nations in Angola, the Pharoahs know failure could signal the end of many international careers, including that of 38-year-old goalkeeper Essam El-Hadary.

And in a nation still embroiled in a popular uprising, footballing defeat is the last thing Egyptians need.