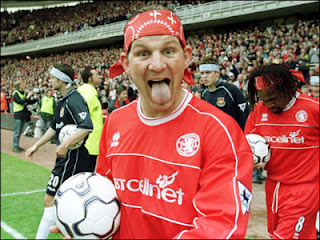 Dean Windass is a bit of a character. Talented, effective, funny. As a professional footballer he never ­played for the glamour clubs in Manchester or London, but he did okay. He earned R5 million a year, bought high-fashion R2 000 T-shirts and “every new car” on the market.

A month ago, he attempted to kill himself. Twice. He’s not ashamed to admit: “I felt I had no purpose any more, I had nothing to get up for.”

Like Gary Speed, the former Wales manager who hanged himself in his garage in November, Windass is 42. He retired from football two years ago. And he simply can’t handle it.

Though South Africa has no detailed history of former sports stars attempting suicide, the British are awash with them. Frank Bruno, the former world heavyweight champion, tried it. So did Paul Gascoigne, perhaps the greatest footballer of his ­time. Two of England’s most popular sportsmen – yet nothing was done.

Windass admitted to the Sunday People’s Katie Hind (who kindly gave me her permission to reprint the quotes): “Just over a week ago I hit rock-bottom and decided to end it all. I took an overdose first – and when that didn’t work tried to hang myself.

“I have cried every day for the last two years since retiring. People outside football think we have it all. I felt so alone and believed I had nothing to live for. I was in a hole that I didn’t know how to get out of.

“I need to sort myself out which is why I’m speaking out now.”

This week Windass attempted to seek counselling at the Sporting Chance Clinic, run by former Arsenal and England star Tony Adams, who also suffers from depression.

But Windass was told he cannot check in until next month for therapy sessions because the centre in London is fully booked with other former sportsmen and women who desperately need help for a range of problems.

In a statement which may resonate with former sports stars in South Africa, he says: “I hope by speaking out it may help anyone else who is feeling as desperate as I was and that the PFA or FA can help. I don’t want people to feel sorry for me, it is my fault, but hopefully it will help some people like me who are out there.”

Windass admits he had it all after his Wembley play-off winning goal in May 2008 against Bristol City which sent his hometown club Hull City into the Premier League for the first time in their 104-year history.

That goal alone was estimated to be worth £60 million (R720 million) in TV revenue. He played at the top for 19 years with Middlesbrough, Sheffield United, Bradford City and Aberdeen as well as Hull.

He admits: “I wasn’t in the superstar bracket but I was pulling in well over half a million pounds a year, so money was no object. Harvey Nichols was my middle name. I would buy £200 shirts, I’d live in D&G and Prada. Every time a new car came out, Audi or BMW, I would buy it. Top-of-the-range cars were my thing.

“I had a big family house in Leeds worth over a million. I was treated ­like a superstar wherever I went. Now I am living off what little savings I have but they are running out. I did some work for Sky Sports which I loved but that came to an end.

“I’ve tried really hard to get a job. I did all of my coaching qualifications while I was playing. I put my CV into loads of clubs for a coach­ing job but you don’t hear anything back.”

Windass, a rugged, no-nonsense player with a ­nose for goals and entertainment, shrugs: “People have this image of me as this big strong man who can take anything life throws at him. But I’m not ashamed to say I wanted to end it.”

After his retirement as a player at Hull two years ago, Dean turned to booze, often downing 10 to 15 pints of lager and lime. His 18-year marriage to Helen, a 45-year-old police officer, fell apart. He was estranged from his sons Josh, 18, and Jordan, 12.

He admits: “I was aggressive, I’d smash glasses and Helen had had enough which was understandable.

“There were arguments and arguments and then I went off with some­one else. I met her in Hull in a pub. I moved into her house. I split up with her last week.”

And that was when he hit his low­est point. He explained: “Just days ago, alone and drunk at my home in Hull, I swallowed a load of tablets – I think they were painkillers.

“Luckily a friend turned up and made me throw up. I knew I’d been a fool but I couldn’t shake off the depress­ion.

“The next day another dark cloud emerged so I drowned my sorrows with half a bottle of amaretto liqueur.

“I was just over an hour’s drive away from my wife and family in Leeds but it felt like the other side of the world. I thought ‘I don’t want to be in this world any more’.

“I tried to use a bedsheet to hang myself and tied it to a handrail at the top of the stairs but it was too long.

“I was quite drunk and couldn’t get it to work so I got a belt instead. At that point another friend came round so I couldn’t go through with it. Now I’m trying to get better, get back on track. I don’t want to be miserable every day.”

Windass admits the death of Speed, a rival on the pitch, had impact. He said: “He must have been feeling in a similar way to me. When I heard the news I thought that could be me and I continued down that dark corridor of depression.”

“People outside football think we have it all, but we don’t. Look at Stan Collymore (a former England striker, now a radio presenter) and what he’s been through with depression. There’s this assumption ‘he’s a footballer, he’s all right’.

“Everyone thinks that Dean Windass is a laugh and a joke and a kid blah blah blah, and got loads of money and his ­wife and kids are lovely. But that’s all a mask. I was in piec­es, I couldn’t stop drinking or crying. I’ve cried every day for the last two years.

“With no job I’d get up, go for a run and hit the pub. I could still play the big guy because everyone knew me and wanted to buy me a drink.

“But after necking pint after pint I’d take my frustrations out on the family. The follow­ing day I’d repeat the same pattern and tell my wife I was popping out to buy a paper. I couldn’t get work anywhere and blew nearly all my savings. I couldn’t even afford to pay for my son’s motor insurance.

“I scored the winning goal at Wembley to get Hull into the Premiership and foolishly thought I was made for life.

“After I finished playing for Hull I got an assistant manager job at non-league Darlington with Colin Todd which was my dream but we got sacked. It wasn’t a lot of money but it wasn’t about that. I wanted to coach – I wanted to manage.

“That ended and I became increasingly depressed.”

Now Windass is appealing to football’s governing body: “The Professional Footballers’ Association or FA need to help us.”

With great candour, he confesses: “Footballers? We’re not the brightest but you play football all your life.”

This story ran in South Africa's new Sunday tabloid Scoop! last Sunday, along with a long list of sporting suicides and a contact number for local sportsmen who have been where Dean was. For further information see www.scoopnews.co.za.
Posted by Unknown at 10:38